12 Megaclues that Jesus’ Return is Nearer than Ever – Part 2

Fulfilled prophecy is one of the clearest evidences that Scripture is true and inspired by God. In other words, predictions that were made hundreds of years in advance—such as how Christ would be born of a virgin (Isaiah 7:14) or His substitutionary sacrifice for sinners (Isaiah 53)—should lead to the conclusion that Biblical prophecies about the future will be fulfilled as well.

The greatest future prophecy and the believer’s greatest hope (one pastor defined this hope as “something that is certain, but not yet realized”) is the return of Jesus Christ to earth to defeat His enemies and reign for 1000 years.

Last week in part 1 of our interview with Steve Miller, author of Foreshadows—12 Megaclues that Jesus’ Return is Nearer than Ever, we discussed the first several clues such as the rise of globalism and the spread of all-invasive technology and surveillance that will enable the global leader known as the Anti-Christ to control the world before Christ returns.

This week in part 2, we are going to discuss more foreshadows, such as the proliferation of deception, the assault on truth, hostility toward Israel and the Jewish people, and more.

“Watch, be alert, be ready” is what Christ commanded His followers. Join us this weekend as we look forward with expectancy to the return of the Son of God.

New Featured Resource for a donation of any amount: 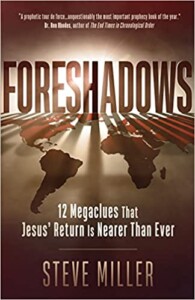 Foreshadows explores 12 major trends that point toward Jesus’ ever-nearing return—and that illuminate how God’s faithfulness, wisdom,
and sovereignty are on display all around us.