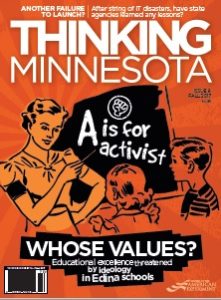 In recent years, the issue of “race” has become an even more contentious and divisive issue. There have been killings of blacks and police officers, riots in Ferguson, Charlottesville, and Baltimore, NFL players not standing for the national anthem, calls to end “white privilege” and “systemic racism”, tearing down or defacing of slavery-era statues, and accusations against President Trump as a “racist”.

It seems almost everything nowadays is viewed through a lens of race. Liberal colleges are known for a “race-ism” worldview (race as primary identity and cause), advocating for compulsory equal outcomes in society rather than color-blind equal opportunity, or worse, shaming the majority as holding “white privilege” that oppresses non-whites.

This obsession with race has actually created even more division and leads to negative ends.

Take the Edina School District for example. The City of Edina is one of the most affluent border-suburbs of Minneapolis, where successful business and societal leaders live, and renown for decades as having the best school system, not just in the state, but even among the top in the country. To graduate from Edina Schools was considered to be on par with an elite private school education.

That is no longer. Over the course of the last several years, Edina Schools’ ranking has dropped all the way to 29th in the state, based on reading and math testing. What has caused the precipitous decline?

According to Katherine Kersten, senior policy fellow at the Center of the American Experiment and our guest this weekend on The Christian Worldview, Edina has transitioned to a “race-identity” curriculum, championed by teachers and administrators from Edina’s elementary schools to the high school, that adhere to this worldview of “race-ism”.

Kersten’s column entitled “Whose Values?” (starts on p. 26 or abbreviated column in Minneapolis Star Tribune here) on the Edina School System has generated a firestorm in Minnesota and is also garnering national media attention.

Please join us this weekend as we discuss, “What Does Race-Ism in Public Schools Look Like?” because it may be coming to your school next.

Note: The Bible says that God created but one race, the human race, and that for Christians, “there is neither Jew now Greek” and “all are one in Christ Jesus” (Galatians 3:28).

What humanistic society calls “race” are really just sub-groups (“people groups”) that humans divide themselves into based on shared worldview, language, cultural tastes, socio-economic status, geographical location, and physical characteristics. For example, why should a white man and a black man who share all of the above characteristics except skin color be considered two separate races? Melanin (pigment) in the skin, is just that, skin deep.

So for the purposes of discussion on this weekend’s program, we will use the term “race” to distinguish between whites and blacks, but we maintain there is but one race with many people groups.