TOPIC: Why Has America Changed So Much?

As everyone can see on our historic buildings and documents, Christianity pervaded early American history. Our founders did not want to establish an official state denomination but it’s clear that Christianity was their guiding worldview.

Our current age is the opposite. In the name of “non-discrimination” or “separation of church and state”, any hint of Christianity is frowned on in public, whether in government, education, media, the courts, and business. The new religion is secularism.

According to Dr. Don Bierle, our guest this weekend on The Christian Worldview, America has changed drastically over its history, digressing from theism to deism to naturalism to our present-day secularism.

What are the distinctives of these worldviews, why has this transition taken place, how is it manifested in society today, and how should Christians respond?

Don will answer these questions and explain six components of the biblical worldview along with the evidence that supports it. 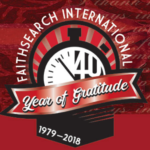 Don Bierle is a former Ph.D. scientist, academic dean and college professor. For the last four decades, he has presided over FaithSearch International, a Christian organization that “proclaims the gospel with evidence” around the world through presentations and resources.

Find out more and attend the FaithSearch 40th Anniversary Benefit Dinner on Friday, April 27 in the Minneapolis area at FaithSearch.org.