Last year in America, many who rioted and destroyed property (while disobeying COVID masking and distancing mandates) were arrested and released. Right now, those who enter the United States illegally are often released into the country. Apparently “justice” has become very selective.

Meanwhile, in Canada, our ally to the north, in a small town just west of Edmonton, Alberta, a pastor has been imprisoned for the past month awaiting his trial two months from now in May. His crime? Burning and looting? Inciting violence?

If you guessed, holding in-person church services in violation of government COVID mandates, you’d be correct.

Pastor James Coates’ imprisonment has garnered worldwide attention. For non-Christians, government and “experts” are their gods, so they heap condemnation on the pastor for following biblically-based beliefs. What is surprising, however, is that many professing Christians say/write that Pastor Coates isn’t really being persecuted because all he had to do was “comply” with COVID mandates. 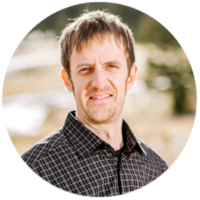 Pastor Eric Davis of Cornerstone Church in Jackson, WY went to seminary with Pastor Coates, has written about his imprisonment, and will join us this weekend to discuss why Pastor Coates should be respected and prayed for, rather than ridiculed, for making the decision to meet in-person.