The people refused to listen to the voice of Samuel, and they said, “No, but there shall be a king over us, that we also may be like all the nations, that our king may judge us and go out before us and fight our battles.  1 Samuel 8:19-20 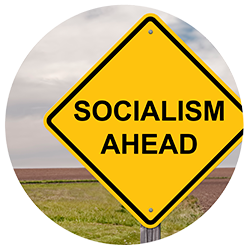 Independence Day is this week, the day when America celebrates the signing, back in 1776, of the Declaration of Independence from the British Empire.  The framers of that document and our Constitution believed in limited government and individual freedoms.

Today there is a growing demand from politicians on the left and perhaps half of the voting population for greater government control over society, which always leads to less individual freedoms.

They want higher taxation for government-controlled and -funded health care, education, housing, abortion, child care, even a “universal income”.  They also want higher rates of immigration and no prosecution for those who enter illegally.  Some are even demanding the abolishment of the Immigration and Customs Enforcement agency (ICE).

These are all tenets of socialism, which the dictionary defines as, “In Marxist theory, a transitional social state between the overthrow of capitalism and the realization of communism.”  And nearly half of the younger generation prefers socialism to capitalism.

Central to socialism is “social justice”, where the government enforces equal outcomes for those it deems “oppressed”, such as ethic minorities, homosexuals and transgenders, women, Muslims, and illegal immigrants.  Where has this socialist demand come from and how will it impact Christians and the church?  Join us this weekend on The Christian Worldview.