Persecution, imprisonment, and murder of Christians is nothing new. The gospels recount the crucifixion of Christ and the book of Acts chronicles the threats, beatings, jailings, and stonings of first century Christians.

Today is no different for believers in Communist China or North Korea, where Christians defy government edicts and gather secretly. In some Islamic countries, Christians are jailed and martyred for refusing to keep silent about the gospel.

In countries like the United States, Britain, Canada, Australia and New Zealand that were founded on Christian values with guaranteed individual liberties, the state has generally allowed citizens to pursue their faith.

That changed about a decade ago when the homosexual movement began prosecuting Christians for refusing to participate in“same-sex” so-called weddings. It was a shock when Christians lost their baking or photography business or were fined for following their biblical beliefs.

But the God-haters wouldn’t stop there. With Covid came a new opportunity to silence and persecute Christians, as government-mandated restrictions and closures of churches in the name of “community health and safety”.

Most pastors and churches “compiled”, but some, like GraceLife Church in Edmonton, Alberta where James Coates pastors, understood the Biblical command for churches to “not forsake our own assembling together” (Hebrews 10:25).

Alberta’s governing authorities couldn’t allow GraceLife to defy their order and so Pastor James was arrested and imprisoned. For what? For continuing to gather as a church in obedience to God’s Word.

Pastor James Coates joins us on The Christian Worldview to explain what happened and to exhort Christians to obey God when government tries to usurp the authority that God gave to the church.

Pastor James Coates is the co-author of a new book titled, God vs. Government: Taking a Biblical Stand When Christ and Compliance Collide (208 pages, softcover, $17.99 retail).

It is our new featured resource that you can order for a donation of any amount to The Christian Worldview. 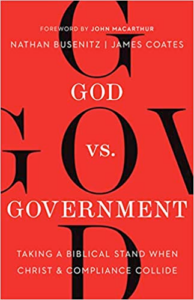