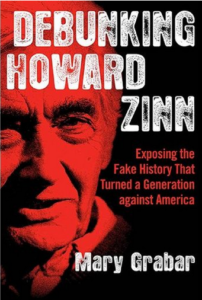 If you’re more than 50 years old, you have likely noticed a major shift in perspective on American history. Christopher Columbus was once the great discoverer of America but now is considered a genocidal tyrant (thus the push to change Columbus Day to Indigenous People’s Day).

The American founders were once the esteemed framers of the greatest nation in history but now are dismissed as white, wealthy slave-holders.

Even America’s war-time sacrifices to stop Nazism and Communism are viewed as imperialistic and profit-motivated.

Where did this “America is evil” perspective come from? In the last 40 years, one man, Howard Zinn, and his book, A People’s History of the United States, has done more to deconstruct Americans’ view of their own history more than anyone or anything else.

This Memorial Day Weekend, as we honor the members of our military who sacrificed for the unique liberties constitutionalized by our founders, Mary Grabar, the author Debunking Howard Zinn: Exposing the Fake History That Turned a Generation against America, will join us to examine who Zinn was, how he rewrote American history, and what impact this has had on our country.

Short Take: Who is Howard Zinn and why is it important to understand his influence on America?

Short Take: Why is Zinn’s rewriting of Columbus’ interaction with the Indians so undermining?

Short Take: How should we answer the discarding of America’s founders as oppressive slave-holders?

Short Take: How did Zinn cast a pall on America’s involvement in war, specifically World War 2?

Short Take: Do you see the country thriving again in light of Zinn’s influence?